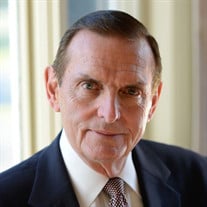 Douglas (Doug) was born on November 20, 1928 in Muskegon, Michigan, and passed, surrounded by his family, on October 6, 2019 at home in Annapolis, Maryland. Doug was a top student in high school, the quarterback of the football team and played the lead in a production of “South Pacific.” Doug then received his undergraduate degree from the University of Michigan, and his Doctor of Osteopathy from the Kansas City College of Osteopathic Medicine. After a lengthy tenure as a Nephrologist at Mount Clemens General Hospital, during which time he developed, planned and ultimately opened a Dialysis Unit at the Hospital, Doug became the Hospital’s Director of Medical Education. In furtherance of his passion for medical education, he received a PhD in Educational Evaluation and Research in Medical Education from Wayne State University. Doug transitioned to the College of Osteopathic Medicine at Michigan State University, serving first as Associate Dean and later as Dean. To spread his ideas and passion for medical education more broadly, Doug moved on to become the President of the American Association of Colleges of Osteopathic Medicine (“AACOM”). In his role at AACOM, as well as in later positions in Arizona and Maine, he had the opportunity to foster the development and strengthening of multiple medical schools throughout the country. Doug was a teacher, an innovator, and a leader who changed the face of medical education – all while still cherishing time spent with his students. Doug leaves behind his beloved wife, Janet, his four children, many grandchildren and one great-grandchild. Doug will always be remembered as an amazing husband, father, grandfather, great-grandfather, physician and innovator.

Douglas (Doug) was born on November 20, 1928 in Muskegon, Michigan, and passed, surrounded by his family, on October 6, 2019 at home in Annapolis, Maryland. Doug was a top student in high school, the quarterback of the football team and played... View Obituary & Service Information

The family of Dr. Douglas Lee Wood created this Life Tributes page to make it easy to share your memories.

Send flowers to the Wood family.