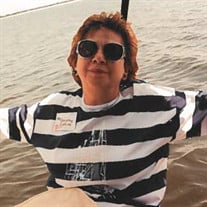 Dorothy Georgette Collins, 88, of Bay Ridge, Annapolis, passed away peacefully on the morning of October 18, 2020. She was born in Washington D.C. on October 3, 1932 to parents George and Fofo Dracopoulos. Dorothy is preceded in death by her husband Albin Collins (and her brother John Drake). Dorothy was a graduate of George Washington University in 1959 and she worked in the Treasury Department as an economist in the statistics of income division. She was also president and head legislative representative of NARFE (The National Association of Retired Federal Employees, Chapter 251 of Annapolis), EEDO Representative, IRS; Federal Women's Program Coordinator, NCVA; Post Commodore of the Admirals Annapolis Yacht Club (AAYC), president of the Bay Ridge Garden Club, president of the Bay Ridge Civic (Citizens Association), and was very active in the Fleet Reserve Association. Dorothy loved dancing, traveling, sailing, hiking, swimming, painting with oils and water colors, stained glass, garden designs, and helping those in need. She married Albin Collins on September 12, 1959 and started a family, eventually having three children: Richard, Gregory, and Paul. They raised their family in Chevy Chase, MD before moving to Bay Ridge. Dorothy is survived by her dear and loving family: three sons; Richard, Gregory and Paul, her daughters-in-law; Elizabeth, Susan and Dana, and her four grandchildren; Britt (Kayla), Becca (Brandon), Alex, and Brennen. She is also survived by her sister-in-law Joanne, as well as many friends and family. Dorothy was so deeply loved and will be missed by so many friends and family. She was always very cheerful and happy to give a helping hand to anyone. She will be sadly missed. All services will be private.

Dorothy Georgette Collins, 88, of Bay Ridge, Annapolis, passed away peacefully on the morning of October 18, 2020. She was born in Washington D.C. on October 3, 1932 to parents George and Fofo Dracopoulos. Dorothy is preceded in death by her... View Obituary & Service Information

The family of Dorothy Georgette Collins created this Life Tributes page to make it easy to share your memories.

Send flowers to the Collins family.