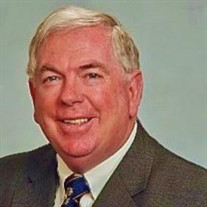 Donald H. Thomas, of Anne Arundel County, 75, was a loving son, born in Baltimore, MD who passed away peacefully at home under hospice care after a severe spinal cord injury becoming a tetraplegic for six months thereafter with multiple physical challenges. He was preceded in death by his loving mother, Golda Vivian [Pat] Marrical Thomas and father, Harry Lewis Thomas; a deceased brother at his birth, Keith Thomas. He is survived by his devoted wife, Susan Rosko-Thomas of 28 years; four blessed children: Brian Thomas, Patrick Rosko, Kimberly Edwards and Justin Thomas; one younger brother, David Thomas in Petoskey, Michigan; nine beautiful grandchildren Chelsea, Zachary, Alex, Skylar, Samantha, Jaytee, Gavin & Harrison Roenigk, and Reece Rosko; and one great-granddaughter Brylee Bowser. Don was the family’s tenacious rock and patriarch of four generations. He was always a steadfast strong guiding role model with a sense of unique comfort with each and every family member with his unconditional love and humor. Don was drafted by the Army in his third year of attending the University of Baltimore School of Business and Accounting. After a three year tour serving 13 months with the 196th Light Infantry Brigade in Vietnam on Hamburger Hill deflecting incoming radar with the 3/82 artillery engaging into a valiant and heroic role as a proud American protecting his country. After traveling for ten years as a field engineer out west once returning home to the USA which led him to be drawn to pursuing an electrical contracting career path. Don’s role soon unfolded as the CEO -Steward of Cinco Electric within the tristate commercial electrical contractors branching out as a trustee on the NECA--IBEW board as well as teaching safety classes to the electrical journeymen. Don was passionate about golfing with the Brass Hats as well as aggressive community service, fundraising efforts. Tailgating at Raven’s Football games were his highlight, equally his family time along with an unwavering support for his fellow Veterans especially educating and pursing their hard earned VA disability benefits. Don’s accomplishments were many. He was a dedicated Red Cross Rotarian volunteering his time to Rotary Park International fundraising projects while spearheading the annual Rotary Crab Feast to support the BWMC Nursing Scholarship programs annual goals. Thus, earning a Paul Harris distinctive award for not only chairing the Glen Burnie Rotary’s annual Crab Feast for years but working at the Glen Burnie Carnival while serving on the Glen Burnie High School’s alumni wall of honor committee. In summary, Don was a fighter through and through with a heart as big as his character. He fought for his county, his family, and his friends. A true patriot until the end. The joy and laughter he brought into a room never went unnoticed nor, his love for a football pool or an occasional game of poker with the guys. A diehard Ravens fan for sure, being a fierce loud and hoarse competitor on and off the field. He was a hero to his children, a knight in shining armor to his wife, and the leader of any group to those who called him a friend. A visitation of family and friends will be held at Lasting Tributes on March 21, 2021 at Lasting Tributes, 814 Bestgate Road, Annapolis, MD 21401 between 10 am to 1:30 pm on what would have been Don’s 76th birthday. All are welcome to attend keeping in mind Maryland’s COVID compliance guidelines. Due to COVID, Don’s memorial service will be restricted to only 40 loved ones with a personal invite. All guests are welcomed to view his service virtually by viewing his Tribute Page on the funeral home website. All are welcome to attend the next day at Crownsville Veteran’s Cemetery Chapel Service to then walk to Don’s final resting place at his columbarium niche nearby. Only ten family members can sit inside the chapel so attendance will require standing outdoors. In lieu of flowers, memorial contributions may be directed to Hospice of the Chesapeake Foundation at 90 Ritchie Hwy, Pasadena, MD 21122 or to any organization that directly supports veterans.

The family of Donald Harry Thomas created this Life Tributes page to make it easy to share your memories.

Send flowers to the Thomas family.