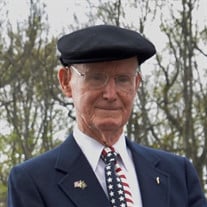 Donald Ray Shearer, devoted husband, father and grandfather, dedicated and loyal career employee, a WWII survivor and American patriot, passed away on February 21, 2019, one-month shy of his 97 birthday. A native of West Virginia, he attended Charleston High School where he was three times class president. After graduating in 1941 he went to work at Owens-Illinois Glass Company in Charleston. Six months later the United States entered WWII. Don enlisted in the Army Air Corps, became a radio operator-gunner on the Martin B-26 Marauder in the 573rd Squadron of the 391st Bombardment Group and deployed to Matching Green, England. On his 46th bombing mission over German-occupied France, his plane was attacked, caught fire, and crashed. The pilot ordered the crew to jump and upon seeing the bombardier and co-pilot exit the airplane, both of whom were on fire, Don jumped. The pilot and two aircrew members did not survive the crash. What followed was a series of events and a little-known story of 168 allied airman imprisoned at the Buchenwald Concentration Camp. Their story and Don’s included evasion and rescue, betrayal, capture, and interrogation by the German Gestapo, imprisonment at the infamous Buchenwald Concentration Camp, and a race against time to escape execution, a torturous cold winter march, and controversial hush-up that followed liberation by General Patton’s Third Army on April 29, 1945, after nine months of captivity. Their story is captured in the 2011 award-winning documentary, “The Lost Airmen of Buchenwald,” directed by Mike Dorsey. A half century later he returned to France as honored guest in the town of Vert-en-Drouais. He memorialized the unveiling of the monument honoring his pilot and crewmen who perished, and celebrated with his French rescuers and resistance forces, the consequences of patriotic acts - liberty regained. Don always reminded his audiences the price of freedom…“we are the land of the free and the home of the brave because over 400,000 (WWII) American forces did not come home.” After the war Don returned to Charleston, WV and started what would become a 36-year career with Union Carbide Company, first as an hourly laborer, and retiring as a safety supervisor. In 1951, Don married Martha Frances Moore. They had one daughter, Donna Rae. Don enjoyed traveling and was a long-time member of Brooks Bird Club. He visited all fifty states and six continents. He will be remembered by countless grade school to college age students, that heard his wartime story and emotional testimony “Freedom is not Free.” He would give Veterans Day talks and share: “I made this vow to myself while suffering from the hellish, almost unbelievable treatment in Buchenwald, that once free, if I was not truly hungry, truly cold or nearly scared to death, I would not complain. I have kept that vow and benefited by so doing.” Don’s life came full circle with the birth of grandson. Dee Dee, as he was called, played a special role in raising his grandson, LT Nicholas Johnson, USN. He was preceded in death by his parents and his sister Norma Jean Shearer Smith and husband Phil Smith. He is survived by his wife and daughter, son-in-law Ed Johnson and his grandson’s wife, McKenna Johnson. A private memorial and interment ceremony at Arlington National Cemetery are planned. In lieu of flowers, donations in Don’s memory can be made to Gold Star Teen Adventures a program to enhance the lives of children of fallen military members. Donations can be made in the following ways: Online: https://www.classy.org/give/164201/#!/donation/checkout Via USPS: Gold Star Teen Adventures, 3350 Footbridge Lane, Ste. 124, Fayetteville, NC 28306 By phone: 910-987-6314

The family of Donald Ray Shearer created this Life Tributes page to make it easy to share your memories.

Send flowers to the Shearer family.