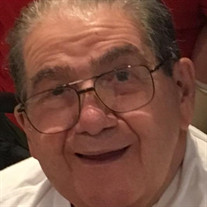 Donald (Don/’Poppy’) Gonsalves passed away on 11 December 2019 in Severna Park, MD surrounded by his loving family at the age of 86. Don was born on 22 August 1933 in Providence, Rhode Island to Manuel and Theresa Gonsalves, and married Katherine (Grossi) Gonsalves on 4 July 1952 who predeceased him earlier this year. He started a family in East Providence, RI and resided in Severna Park, MD for over 40 years. He was a loving father to Donna Hagaman, Linda Nolan (husband John), Cheryl Sparfven, and Donald J. Gonsalves (wife Bethanie); adoring, fun-loving Poppy to 8 grandchildren, 8 great-grandchildren, 2 great great-grandchildren, as well as those adopted into his extended family; and caring uncle and cousin to many. Don graduated from East Providence High School in 1951, served in the U.S. Navy during the Korean War, was a life-long supporter of US Military Troops, and held various logistics positions during his career to include MD State employment. As a member of Knights of Columbus for over 60 years, holding both elected and appointed positions, Don frequently earned top fundraising honors in their annual Tootsie Roll drive. He was crowned ‘Meatball King’ for the fundraising events of Old Severna Park and YMCA swim teams. Don was a big personality and loved cracking jokes. Some of his greatest joys were cooking, gardening, and spending large family vacations in Ocean City, MD, during which he provided an annual reminder that he was poker king. The family sends special thanks to the staff at Future Care Chesapeake and Hospice of the Chesapeake. A celebration of life at a date to be determined and updated on the funeral home webpage, www.LastingTributesFuneralCare.com In lieu of flowers, donations in his memory can be made to Knights of Columbus Father McGivney Chapter Tootsie Roll drive or Opportunity Builders Incorporated (OBI) Millersville, MD.

Donald (Don/&#8217;Poppy&#8217;) Gonsalves passed away on 11 December 2019 in Severna Park, MD surrounded by his loving family at the age of 86. Don was born on 22 August 1933 in Providence, Rhode Island to Manuel and Theresa Gonsalves, and... View Obituary & Service Information

The family of Donald F. Gonsalves created this Life Tributes page to make it easy to share your memories.

Send flowers to the Gonsalves family.