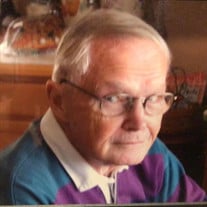 Donald “Don” Eugene Garrett, age 86, of Annapolis, MD passed away Sunday, November 15, 2020, after a long battle with Parkinson’s. Born June 14, 1934 in York, PA, he was the son of the late George A. and Beryl Miller Garrett. Don was a veteran of the United States Air Force and served during the Korean war. He worked for I.B.M. as a systems programmer, helping develop many of the systems that are in place today. He was passionate about the Pittsburgh Steelers and his children, grandchildren and great grandson. His smile and kindness toward others was evident everywhere he went. He was preceded in death by his son, Jerry Garrett. He is survived by his brother Fred A. Garrett and wife Phyllis of Hagerstown, MD, daughter Jeanne Garrett-Coward and husband Paul of Annapolis, MD, son Will A. Garrett and wife Joyce of Charlotte, NC, grandchildren Harmony Hyde, Jace Adam Hyde, Jr., Adam Alexander McClaren Hyde, Jacqueline Sanders, Brianne Hodges, and great-grandchildren Logan, Jackson, and Ruby. He will be greatly missed by his family. No memorial services will be held at this time due to COVID-19 and burial will be private. Memorial donations may be made in his name to the Michael J. Fox Foundation for Parkinson’s Research, PO Box 5014, Hagerstown, MD 21741-5014 or online at michaeljfox.org.

The family of Donald Eugene Garrett created this Life Tributes page to make it easy to share your memories.

Send flowers to the Garrett family.