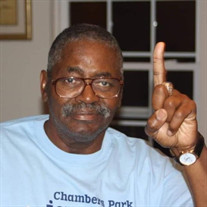 Clemmon Edmonson Parker, 69, of Severna Park, Maryland passed way peacefully on August 11, 2020. He was born on December 3, 1950, in Annapolis, Maryland to the late Galloway and Mildred (Hunt) Parker. He graduated at Anne Arundel Public Schools. On January 14, 1974 he married Melba (Brown) Parker. They enjoyed 46 years of marital bliss. Clemmon worked various jobs; however, none was as rewarding as his time at Harbour School where he worked with developmentally disabled children. Clemmon was celebrated in the Annapolis community. The name Celmmon Parker and the bigger than life stories preceded and followed him. His charismatic disposition drew people to him. Clemmon was best known for his amazing musical talents. Anytime he played the guitar or sang a song, everyone stopped to listen. He knew how to put on a show. He was a member of several bands but was most proud of the band that he founded "The Legendz Band." Clemmon also loved to spend time with family and friends. His cookouts were legendary. The great food, horseshoes and late night jam sessions left an incredible mark on the hearts and minds of all. Family was everything to him. He had an uncanny way of making all who he encountered feel like they were the most special. He treasured his quality time with his "best friend" and great grandson, Bryson. Clemmon was preceded in death by his parents, Galloway and Mildred Parker; brother, Galloway (Lee) Parker, and sister Mildred (Marigold) Perry, and nephew, Daryl Parker. He leaves to celebrate his life, his devoted wife, Melba Parker; son, Clemmon "Marlow" Parker; daughter, Chante Gill; granddaughters Nyasia and Tajai Gill; great-grandson, Bryson Owings; mother-in-law, Laura Brown; sisters, Juanita Bowles and Bedella Hicks; brothers, Asbury, Alford (Shervon) and Marvin Parker (Yuko); brothers-in-law, Craig (Sherry), Jason, and Tyler Brown and sisters-in-law, Lisa and Lynette Brown; and a host of nieces, nephews, cousins, and dedicated Legendz band members, friends and the Parole community at large.

The family of Clemmon Edmondson Parker created this Life Tributes page to make it easy to share your memories.

Send flowers to the Parker family.