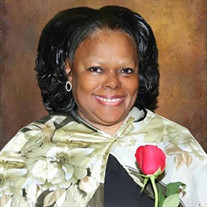 Clementine Moore, who had many nicknames such as Lean, Wimpy, and Clem, went from labor to reward on Saturday June 6th, 2020. Clementine was born on February 3, 1943 in Harford County, MD to the late George Thomas and Clementine Brown-Thomas. Clementine was one of nine children. She was proceeded in death by siblings: Joseph, Samson, Eleanor, George, Mattie, John, and Jacob. The family later moved to Laurel, MD and resided in a small family-oriented neighborhood called Bacontown. Clementine was educated in the Anne Arundel County school system. She attended Bates High School where she made many fond memories. In Bacontown and the surrounding areas she would meet many lifelong friends and three best friends: two who preceded her in death, Naomi Garnett-Brown and Barbara Morgan-Carter and one who survives her, Dolores Alfred. In Laurel, she met the man that would become her loving and devoted husband of over 55 years, the late Harry J. Moore. Clementine and Harry wedded into holy matrimony on June 25, 1961 and from this union the couple would have 4 children. Two of which proceeded them in death, Harry Jr (Noonie) and Monica. While raising their children, Clementine and Harry moved from Laurel to Landover where they purchased their first home in the late 1960’s and then later would purchase their second home in Upper Marlboro. Clem went to nursing school and worked shortly as a nurse, but later returned to a job that she enjoyed as child and that was making people’s homes look good. Clem could make a sad house smile after she finished cleaning. She was the first entrepreneur in the family by running her own self-made cleaning business. Even though she did not have an official name or business cards, she was her own boss. She would later become more of a family member rather than a housekeeper to some of these families attending weddings, funerals, and other gatherings. These are the special families of Dorothy Prather, Anne Powell, LaVarne Hines, Aileen, and Mrs E.Finney. Wimpy was known for her infectious smile, beautiful knitted quilts, a forgiving and sweet spirit, having unconditional love for all mankind and for being freehearted. Wimpy and Joe, from the time they married and until recently, always left their doors open for anyone in need. They gave many their first start or a second chance by allowing their siblings, nieces, nephews, and neighbors to reside with them when in need and never asking for a dime. Clementine loved the Lord with her whole heart and accepted Christ at an early age, she later became a member at Riverdale Baptist in Upper Marlboro, MD and enjoyed their Sunday services and fellowshipping with all of the members she befriended. Over the years she traveled with her husband’s singing group, The Harmonizing Kings, and made special bonds with their wives and children, Joan & Devon (deceased), Peggy (deceased) Larry and Margo & Warren. Later Wimpy and Joe would spend their time traveling every weekend to their favorite getaway Indian Acres simply just relaxing or fellowshipping with other Indian Acre families. Clementine leaves to cherish her memory two children: daughter, Christine Wells (Lawrence), and son, Japheth Moore; one sister, Delores Morgan; one aunt, Carrie Washington; one aunt-in-law, Verrell Woods; 11 grandchildren: Montrial, Candice, Sherrie (Lionel), Lennard (Terika), Crystal, Tonio, Sherese, Sierra, Sherrell, Keeana, and Kendric; nine great-grandchildren: brothers/sisters- in-laws: Virgie Thomas, William (Carolyn), Nancy (Vernon), Alfred (Ann), Albert (Mattie); sister-in-Christ, Marjorie Moore; God children: Joanne Lee, Tia Dobson-King, Kenneth Carter, Donald McBride, Louvenia Hudson, William Moore and Julie Holtness; and a host of nieces, nephews, cousins, friends, and neighbors. A public viewing will be held at Lasting Tributes from 9-11 am on Saturday, June 13, 2020. Clementine's funeral service will be reserved for family only, but friends can watch a live stream of her service on Lasting Tributes' website. Due to social distancing practices, the repast will be for family only. Burial will also be private.

Clementine Moore, who had many nicknames such as Lean, Wimpy, and Clem, went from labor to reward on Saturday June 6th, 2020. Clementine was born on February 3, 1943 in Harford County, MD to the late George Thomas and Clementine Brown-Thomas.... View Obituary & Service Information

The family of Clementine Moore created this Life Tributes page to make it easy to share your memories.

Clementine Moore, who had many nicknames such as Lean, Wimpy,...

Send flowers to the Moore family.