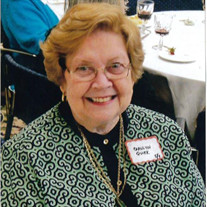 Carolyn E. Quirk was born on May 4, 1938 in Atlanta, GA to the late Clifford Eley, Jr. and Gertrude Herring Eley. She attended Annapolis High School, graduating class of 1956, and later attended University of Maryland. She began her career as a secretary working for Crownsville State Hospital. On February 13, 1960 she married Thomas Marshall Quirk of Linthicum, MD and resided in Arnold, MD. While living in Arnold, Carolyn began working for Henry M. Murray Insurance Agency, until staying home to raise her family. In 1965, she and her family moved to Severna Park, until 1995, when she and her husband moved to Grasonville, MD. On March 18, 1999, after 39 years of marriage, her husband predeceased her. In October of 2013, Carolyn happily moved to Ginger Cove Retirement Community of Annapolis. She quickly became an avid volunteer including assisting at the boutique, health center and reading to visually impaired friend. She was a stranger to no one. Carolyn was a member of the Delta Gamma Sorority, lifetime member of the Annapolis Yacht Club where she enjoyed playing bridge, a past scout leader and past president of the Jones Elementary School PTA, Severn River ladies bowling league, and the Severn River garden club. She enjoyed boating on the Chesapeake, gardening, traveling, playing bridge and reading. She is survived by two daughters, Kelly Ann McPhee (George) and Kristin Quirk Clevenger (James); four grandchildren, Gehrig Thomas McPhee, Riley Ann McPhee, Thomas Quirk Clevenger and Logan Louise Clevenger. A memorial service will be held on January 7, 2018 at 11 am at St. Margaret’s Episcopal Church 1601 Pleasant Plains Rd, Annapolis, MD. Memorial contributions may be made to the Nature Conservancy 4245 N. Fairfax Dr., Suite 100 Arlington, VA 22203.

Carolyn E. Quirk was born on May 4, 1938 in Atlanta, GA to the late Clifford Eley, Jr. and Gertrude Herring Eley. She attended Annapolis High School, graduating class of 1956, and later attended University of Maryland. She began her career... View Obituary & Service Information

The family of Carolyn E. Quirk created this Life Tributes page to make it easy to share your memories.

Send flowers to the Quirk family.