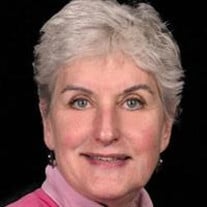 Carol Waller Youmans, age 79, of Annapolis MD. passed away March 27, 2019. She was born January 24, 1940 in Akron, Ohio to the late Fletcher Charles and Eleanor Taylor Waller. Carol graduated from Fox Lane High School in Bedford, NY., and earned a B.A. in English from Bryn Mawr College in 1961. She married William A. Dorsey III and moved to Glenn Dale, Md. Carol taught English and supported theatre productions at the St. Anselm’s Abby School in Washington D.C. She studied art, sang with the Lanham Chorale, and earned her pilot’s license. She moved to Annapolis in 1978 and became active in the theatre and arts community. She served as director, set-designer, educator, and multi-term president of the local community theatre Colonial Players. At Colonial Players she was the first to direct racially integrated productions. In 1979 Carol married John (Jack) Youmans after he posted his proposal on the billboard on the Annapolis City Dock. Jack passed away in 2014. As a member of the Board of the Kunta Kinte-Alex Haley Foundation 2004-2006 Carol led reconciliation circles to help heal racial division in the city of Annapolis. For over twenty years, she worked as manager of Free State Press in Annapolis. After retirement she traveled, painted, and mentored many young artists reviving the Promising Playwrights Contest and the One Act Play Festival at Colonial Players. She was a creative force for good and will be missed by many. Carol is survived by her brother Fletcher C. Waller of Mercer Island, Wash., her sister Adrien Waller Helm of Athens Ga. and Barton, Vt., her son William A. Dorsey IV and his wife, Lisa, of Port Republic, Md. and her daughter Alice Taylor Dorsey O’Donnell and her husband, Paul, of Severna Park, Md. She leaves five grandchildren and one great-grandchild. A celebration of Carol’s life is planned for later in May. Gifts may be made in Carol’s honor to the Colonial Players Scholarship Program. Her Celebration of Life will be held at Quiet Waters Park, Annapolis Wednesday May 8 6-9 pm.

The family of Carol Waller Youmans created this Life Tributes page to make it easy to share your memories.

Send flowers to the Youmans family.