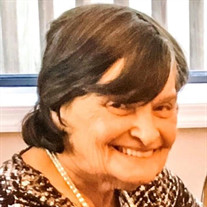 Carol Mae Thompson died at her home in Annapolis on the evening March 26, 2020, with her husband of 38 years, Andrew Thompson, at her side. She was 82 years old. Carol's health declined in recent years as she battled worsening dementia. Her passing was peaceful and her family is thankful that in accordance with her wishes it did not involve hospitalization or heroic measures. In addition to her husband, Carol is survived by her daughters Joanne Goodman (Annapolis) and Jaylene Wikoff (Virginia Beach), sons Brian Craig and Danny Thompson (both of Florida) and Andrew Thompson (North Carolina), as well as her sister Maureen Baril (Fresno). She was predeceased by her son John, and her other sister, Betty. Carol (Née Cotta) was born in 1937 in Tulare County, California, and as a child lived on a ranch near Visalia. Carol lived in Annapolis for much of her adult life. There she met and married the love of her life, Andy. Her working life began at Montgomery Ward in the accounts receivable department, and she was also a bookkeeper for Rams Head in Annapolis. She retired after many years as a bookkeeper for the Naval Academy Athletic Association. During those years Carol and Andy seldom missed a Navy home football game — often joined by Joanne and her family. After retiring, Carol stayed busy on camping trips with Andy, with her children and grandchildren, with her church — Mayo United Methodist, and by reading as many books and magazines as she could. Carol has many grandchildren. her daughter Joanne married Phillip Goodman, and they have three grown children - Devon, Ethan and Abigail. Daughter Jaylene married George Wikoff, and they also have three grown children - Michael, Matthew and Christopher. Joanne and Devon are so happy that Carol was still with us and able to enjoy time with her great granddaughter Emma for the past two years. Carol and Emma spent many special afternoons "babysitting each other," thought they both knew Joanne was in charge. Carol was a vivacious and sassy woman, who always spoke her mind and made friends easily. Everywhere she went she brightened people's day with a compliment or conversation. Even on her worst days with dementia her love for her family was clear. It was difficult as she declined, but there was still great moments together where she would make a joke or bring up a memory. The support and love of their church was so meaningful to Carol and Andy during this period. Also, Carol and Andy continued to spend camping in Virginia, where the two of them found comfort and familiarity. Carol will be missed by her family, but we are happy at the peace she has found. We will remember her humor, larger than life personality, and love. A service in celebration of Carol’s life will be announced at a later date. The family requests that in lieu of flowers if you wish please make a donation to Mayo United Methodist Church. Thank you.

Carol Mae Thompson died at her home in Annapolis on the evening March 26, 2020, with her husband of 38 years, Andrew Thompson, at her side. She was 82 years old. Carol's health declined in recent years as she battled worsening dementia. Her... View Obituary & Service Information

The family of Carol Mae Thompson created this Life Tributes page to make it easy to share your memories.

Carol Mae Thompson died at her home in Annapolis on the evening...