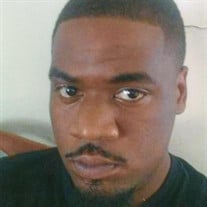 Carlos Lamar Thompson, born April 26, 1986, was the second twin of Charles Lee and Greta Lynn Thompson. Carlos departed this life Monday, September 7, 2020 unexpectedly. “Los” as he was affectionately known, was educated in the Anne Arundel County Public School System, and raised in the Christian faith. He sang on the Hattie J. Forrester Chapel Choir and participated in various youth activities sponsored by Mt. Zion United Methodist Church (Eastport). Fast cars were one of Carlos’s passions. He, his dad, and his twin, Charles, could often be found tinkering in their “Hot Rods” and attending car shows. Spending time with family was another of Los’s passions. He particularly enjoyed joking around with his parents and siblings. Even though he had many passions he had a special place in his heart for dogs especially Sandy (Tinky Winky). He also had one very special friend who was James Brashears Jr. He was preceded in death by his grandparents Mr. and Mrs. Henry and Catherine Thompson , Martha Irene Green, and Edward William Pinkney. Also a host of aunts and uncles. In addition to his parents, Carlos is survived by 6 siblings, Charles Lee Thompson Jr., Greta Lynn Thompson Taylor (Anthony), Michael, Charese, Catherine, and Charnese; four nephews, Anthony, King, Noah, and Ethan, and one niece, MacKenzie; also Aunts and Uncles, Edward and Emily Pinkney , Henry Thompson, Geraldine Johnson, two great-aunts, Annabelle Herbert and Cecelia Avery, and a host of cousins and friends who cherished him. We praise God for the life of Carlos Lamar Thompson and ask that you keep the family in continued prayer.

The family of Carlos Lamar Thompson created this Life Tributes page to make it easy to share your memories.

Send flowers to the Thompson family.