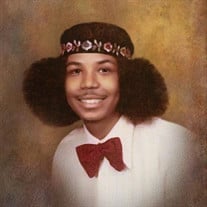 Carl Roger Martin, Jr. was born in Annapolis, Maryland on August 23, 1953 to the late Carl Roger Martin, Sr. and Alverta Williams-Martin. He departed this life on May 14, 2021. He was educated in Anne Arundel County Schools and was employed... View Obituary & Service Information

The family of Carl Roger Martin Jr. created this Life Tributes page to make it easy to share your memories.

Send flowers to the Martin family.