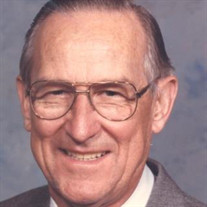 Calvin Eugene Lebo was born October 28, 1922 in Penbrook, near Harrisburg, Pennsylvania. His parents Daniel Monroe Lebo and Carrie Ann Hoover raised a close-knit family of 5 sons and 1 daughter along the idyllic banks of the Susquehanna River. Ken, Richard, Calvin, Clifford, Paul, and Hazel learned life’s lessons, the importance of family ties, and resilience. Calvin graduated from Halifax High School in 1940. He worked as an aircraft mechanic in Middletown, Pennsylvania and Savannah, Georgia before enlisting in the US Air Corps in June 1942. After earning his wings as a pilot on a Stearman biplane, he became a flight instructor. In Dec 1944, he was sent overseas to New Guinea, attached to the 63rd troop carrier squadron in Biak. He helped move supplies and evacuate wounded during the Mindanao Campaign in 1945. He was promoted to 1st Lieutenant and earned several campaign medals, the Air Medal, and a Distinguished Unit Badge, before being discharged in Sept 1946. Recently he attended the 70th anniversary celebration of VE Day in Washington DC, thrilled to hear the roar of a C-47 again and reminisce with fellow veterans. Returning to Halifax, Pennsylvania after the war, he started taking college courses. He met his wife, Catherine Weaver on a double date with her fun-loving cousin, Galen Motter. They were married in Zion Lutheran Church in Dauphin, Pennsylvania in June 1949. Calvin finished his studies, earning a BS in Economics, with a major in Accounting from Franklin & Marshall College in June 1950. The young newlyweds designed and built their first home together in Paxtang, near Harrisburg in the summer of 1952. Calvin served on the Church Council at Faith Lutheran Church in Pittsburgh and did the church’s accounting for many years. Calvin’s life is distinguished by both persistence and change. He cherished lifetime friends from his high school class. He shared 60 years of marriage with his wife Catherine. He joined American Water Works Service Company in 1950, retiring 37 years later as Comptroller of Accounting, having worked in Harrisburg, Pittsburgh, and Richmond, Indiana. He is the oldest member of the Lebo family over many generations. Yet the same spirit that moved a young man to go off to war, brought Calvin to join his daughters in Annapolis much later in his life. He found new friends dear to him, enjoyed the accomplishments of his grandson and granddaughter, and decided crab cakes were a special gift. Survivors include daughters Wendy L. Green and her husband Michael J. Green of Annapolis, Dr. Cathy Jean Lebo of Annapolis, and Diane Lebo of Falls Church, Virginia; grandson Christopher Michael Green and his wife Alex Barniea Green of Annapolis, granddaughter Katie Marie Green, of Virginia Beach, and sister-in-law Barbara Lebo of Irvine, California. Calvin was preceded in death by his parents, brothers and sisters, and his wife Catherine A. Lebo. Today his extended family and friends celebrate his life 96 years long, his faith, and his service.

Calvin Eugene Lebo was born October 28, 1922 in Penbrook, near Harrisburg, Pennsylvania. His parents Daniel Monroe Lebo and Carrie Ann Hoover raised a close-knit family of 5 sons and 1 daughter along the idyllic banks of the Susquehanna River.... View Obituary & Service Information

The family of Calvin Eugene Lebo created this Life Tributes page to make it easy to share your memories.

Send flowers to the Lebo family.