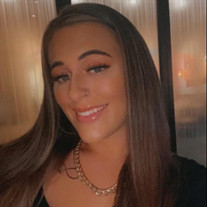 Brianna Kelsey Peters, of Annapolis, passed away unexpectedly on April 12, 2021 at the age of 22. Brianna is survived by her mother, Shelby Jaffray and step-father Richard Jaffray, father, William Peters, siblings Nicholas and William Peters, Faith Jaffray, Charles William Peters, Caless Gover, Sydney Hora, grandparents Paula and Jack Davis and Donna and Rick Jaffray, aunts Crystal Smith (Cornell Smith) and Caitlyn Davis (Will Schwallenberg), 12 cousins, her loving boyfriend Gregory Pinkney, and a host of other family members and friends. Brianna will be missed dearly by them all. She is preceded in death by her great grandparents Pauline and William Moreland, and grandparents Charles and Joanie Peters. Brianna was born on March 13, 1999, in Annapolis and graduated from Broadneck High School in 2017 before going on to study nursing at Anne Arundel Community College. While in college, she worked as a server at the Cheesecake factory. Brianna was an accomplished cheerleader and track and field athlete, and loved listening to music, going to the beach and planning vacations. But she loved spending time with her family more than anything. Brianna was a beautiful, loyal, honest person, and was constantly setting (and achieving) goals for herself. She touched the lives of all who knew her.

The family of Brianna Kelsey Peters created this Life Tributes page to make it easy to share your memories.

Send flowers to the Peters family.