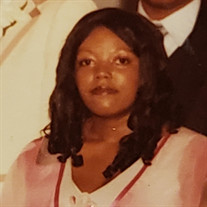 Beverly Wilson, entered peacefully into eternal rest on Wednesday, January 23, 2019 after a lengthy illness. Beverly was the daughter of the late Alverta O. and Arthur Jones. She was born on April 6, 1955 in Baltimore, Maryland. Beverly was educated in Anne Arundel County Public Schools. She then furthered her education to be become a Home Health Aide. Beverly had her own personal relationship with the Lord from a young age. She was raised up in the family church of Mount Tabor United Methodist Church. She would give generously to church organizations. She understood the scripture, “you reap what you sow…”, as she would selflessly give monetary gifts in the hopes that it would reach other people in need. She would literally go without to make sure your needs were met. She didn’t have to personally know you to give. It gave her joy knowing that she could provide to less fortunate. Beverly was a business owner of multiple businesses. Her first business was “Wilson’s Imports and Exports”. Wilson’s Imports and Exports is where she sold many items for wholesale for 8 years. She loved to cook and she cooked since her teenage years. She then ventured out on a different avenue and opened up a soul food restaurant called, “Soul Food Crib”. While focusing on her businesses, she was always dedicated to caring for her patients. She would leave from working long hours at her restaurant to take care of them. Beverly was preceded in death by, Alverta Jones (mother); Arthur Jones (father); Francis Rawlings (grandmother); Elzie Rawlings (grandfather); William T. Ridgley (Uncle) and Alice E. Turner (Aunt). She leaves to cherish Sisters; Sarah Johnson of Glen Burnie, Gertrude “Trudy” Hall of Severn. Brothers; John Hall (Baltimore); Elijah Hall (Baltimore); Reginald Howard (Baltimore), Zachary Howard (Severn) and Michael Jones (Baltimore); two god-daughters; a devoted god-daughter -Tonia Johnson (Terance) of Glen Burnie; Nicole Gross (Annapolis); a devoted friend Pamela Gross (Annapolis); and a host of nieces, nephews, cousins and friends.

Beverly Wilson, entered peacefully into eternal rest on Wednesday, January 23, 2019 after a lengthy illness. Beverly was the daughter of the late Alverta O. and Arthur Jones. She was born on April 6, 1955 in Baltimore, Maryland. Beverly was... View Obituary & Service Information

The family of Beverly Wilson created this Life Tributes page to make it easy to share your memories.

Send flowers to the Wilson family.