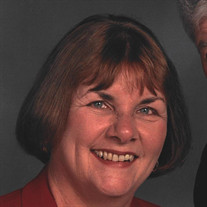 Bette Kittel Rimsky, 73, of Annapolis passed from this life to be with our Lord on Wednesday, September 2, 2020 at Anne Arundel Medical Center. Born on September 13, 1946 in Wayne, NJ she was the daughter of the late Erich and Charlotte Kittel. A 1964 graduate of Wayne Valley High School, she attended Hiram College in Ohio graduating with a degree in Elementary Education in 1968. After short periods in Philadelphia and Bradford, Bette moved to Pittsburgh, PA around 1972 where she taught for 32 years at Washington School for the Mount Lebanon school district. Bette found her special guy in 1998 and was married to Gerald A. Rimsky in 2000. In nearly 20 years of marriage, Jerry and Bette spent their golden years traveling extensively, taking 19 cruises and many other trips throughout Europe, Asia and the United States. Two of her favorite places to be were in the mountains of Colorado and on Marco Island, FL where she spent many winter months searching for seashells. A few years after her retirement in 2004, love of family brought Bette to Annapolis, MD in 2007 to be near her step-daughter’s family. She enjoyed being part of her grandchildren's lives by attending school performances, volunteering in their schools and playing boardgames. She became very active in the Heritage Harbour community and found many friends in various golf, book, bridge and baby boomer clubs. She is survived by her husband, Gerald Rimsky; step-daughter, Andrea Rimsky Horning and her husband Steve; three wonderful grandchildren, Emma, Andy and Lily Horning; sister, Judy Yancey and her husband Ken; four special nieces Jennifer Tabelon, Wendy Peterson, Bonni Arjona and Sherrie Beres; and many grand-nieces and nephews. Bette will be remembered at Lasting Tributes located on Bestgate Road, in Annapolis. Viewings will be from 2-3 PM and 6-8 PM on Tuesday September 8th. Funeral service at 3 PM (limited seating for family). Donations in memory of Bette are being accepted at First Presbyterian Church of Annapolis.

Bette Kittel Rimsky, 73, of Annapolis passed from this life to be with our Lord on Wednesday, September 2, 2020 at Anne Arundel Medical Center. Born on September 13, 1946 in Wayne, NJ she was the daughter of the late Erich and Charlotte Kittel.... View Obituary & Service Information

The family of Bette Kittel Rimsky created this Life Tributes page to make it easy to share your memories.

Bette Kittel Rimsky, 73, of Annapolis passed from this life to...

Send flowers to the Rimsky family.