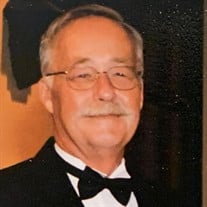 Benton (Ben) Delos Cook, II, of Crofton, Maryland, passed away peacefully on February 18, 2022. He was born in Lowville, NY on September 5, 1945 to the late Marshall Makepeace Cook and Jeanette Jamieson Cook. Ben grew up in Maryland, graduating from Surattsville High School. He went on to attend The University of Maryland, where he met his wife Kathryn Hicks Cook and graduated in 1968. After his graduation, he joined the US Army and the couple was stationed in Nuremburg, Germany. Benton and Kathryn had two children while overseas, Benton Delos Cook, III and Meredith Kathryn Cook Davis. Upon their return to the states, Benton embarked on his 35-year career in the field of association management and IT. He started out working at his alma mater, The University of Maryland College Park, then moving on to the American Pharmaceutical Association, the Chemical Manufacturers Association and the MD State Department of Labor. In his free time and retirement, Ben loved working on classic cars and sailing on the Chesapeake. His family cherishes the memories of their time spent with him, some of the best times being out on the water. Ben is survived by his wife Kathryn Hicks Cook; son Benton Delos Cook, III; daughter Meredith Kathryn Cook Davis; and five grandchildren: Benton D. Cook IV, Thomas J. Cook; Jackson W. Davis, Amelia K. Davis and Abigail J. Davis. A celebration of life remembrance for all friends and family will be held on April 9, 2022, at Lasting Tributes Funeral Care, located at 814 Bestgate Road in Annapolis. The memorial gathering will begin at 10:00 am, with the memorial service following at 11:00 am. In lieu of flowers, memorial contributions can be made to the Wounded Warrior Project. (www.woundedwarriorproject.com)

The family of Benton Delos Cook II created this Life Tributes page to make it easy to share your memories.

Send flowers to the Cook family.