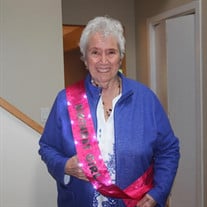 Today would have been her 82nd birthday. In honor of her life, lift a glass of wine, coffee, tea, or whatever you have and celebrate her life. Cheers to the strongest and most courageous women that tempered her spirit with love. She was born to Frank and Katherine Saraceno on September 24, 1938 as Barbara Kathryn Saraceno (Bonnie). Her father came to this country when he was 16 from Melili Sicily. Her mom was a first-generation Irish girl. Her father was a restauranteur, and she had many fond memories of helping her father in the restaurant. Sadly, he passed away when she was 12 years old and was then raised by her mother and grandmother. She married and had two daughters, Debra and Barbara. Always adventure seeking, the family enjoyed the shore, boating, swimming, fishing, clamming and camping many summers on an island. She later divorced and persevered as a single parent, working multiple jobs and managing a three-family house until she met Peter Wirtz and remarried. After a marriage of 30 years Peter passed in 2013. Bonnie was passionate about arts and crafts. Through the years she mastered many crafts and later shared her knowledge with others as she led many Craft, Ceramic and Sewing classes. Quilting was one her most accomplished talents and enjoyed helping others with their quilting projects. As her daughters became adults and their families grew, she enjoyed her annual trips with just the three of them every year to a different destination. Some trips were small, and others were bucket list destinations, however always full of fun and side-splitting laughs. On September 12, 2020, this loving and courageous woman took her last breath at 0509. She is survived by her two daughters Debra LaBree and Barbara Nelson and their families. Grandchildren, Christina Bunch, Anthony Nelson, Nate Cyrus, James Jaworowski, Angelina Nelson, and Sophia Lee. She had the joy of knowing James' children, her great grandchildren, Aurora, Logan and Dianna Jaworowski. She is also survived by her cousin and friend Dorothy Balamucki. Bonnie has passed on not only her strong work ethic and the I can do anything mentality, but an unbreakable sense of family love, support and strength. She will be fervently missed by those that knew her. A private service for only immediate family will be held later. In leu of flowers, find someone you love and send them flowers just because you love them. Life is short and there are never enough days to tell a person you care.

Today would have been her 82nd birthday. In honor of her life, lift a glass of wine, coffee, tea, or whatever you have and celebrate her life. Cheers to the strongest and most courageous women that tempered her spirit with love. She... View Obituary & Service Information

The family of Barbara Wirtz created this Life Tributes page to make it easy to share your memories.

Today would have been her 82nd birthday. In honor of her life,...

Send flowers to the Wirtz family.