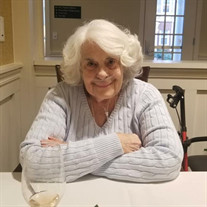 Barbara L. Naumann, 71, of Edgewater passed away on June 5, 2019. Barbara was born on October 9, 1947 in Washington, D.C., and graduated from St. Cecilia High School in 1965. After high school, she met her beloved husband and best friend, George, at Andrews Air Force Base Hospital. They were happily married for 47 years and had two children, Michael and Susan. Over the years Barbara served as an invaluable employee for the Hall of Records, Flowers by James, Lakemont Memorial Gardens, and South River Health and Rehab. Barbara was preceded in death by her loving husband George E. Naumann, her parents Pete and Sue Lambden, her sister Rosemary Jackson, and her brother, John Lambden. Barbara was an avid collector of many things, including Hummels. She enjoyed drinking Diet Coke and talking on the phone for hours with her loved ones. She had an engaging personality, loved meeting new people, enjoyed sharing laughs with family and friends and was well known for her beautiful hair. Barbara is survived by her two devoted children, Michael Naumann (and wife Tina) of Lothian, and Susan Naumann Ogden (and husband Joel) of Annapolis. She is also survived by four adoring grandchildren, Jacob and Cameron Naumann, and Samuel and Sophie Ogden, her brothers, Tom Lambden, Roy Lambden and Peter Lambden, a large extended family of nieces, nephews, great-nieces and nephews, and a community of friends and neighbors. Visitation will be held on Wednesday, June 12 at Lasting Tributes Cremation & Funeral Care, 814 Bestgate Road, Annapolis MD 21401 from 5:00 pm until the beginning of her funeral service at 8:00 pm.

Barbara L. Naumann, 71, of Edgewater passed away on June 5, 2019. Barbara was born on October 9, 1947 in Washington, D.C., and graduated from St. Cecilia High School in 1965. After high school, she met her beloved husband and best friend,... View Obituary & Service Information

The family of Barbara Lambden Naumann created this Life Tributes page to make it easy to share your memories.

Send flowers to the Naumann family.