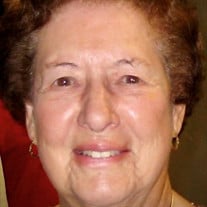 Arlene Gavin of Annapolis died peacefully in her home on November 22, 2020, surrounded by her family. Arlene was just two months short of her hundredth birthday. Arlene was born on February 2, 1921, in Akron, Ohio. She earned her bachelor’s degree at the University of Akron and completed her master’s degree in Social Work at Washington University in St. Louis. Arlene served as a social worker in the Red Cross during World War II. She then moved to Washington D.C. and worked as a medical social worker at Walter Reed Army Hospital. Arlene became a professor at the School of Social Work at Catholic University and then at the University of Maryland. While teaching at the University of Maryland Graduate School of Social Work, Arlene established a groundbreaking program to support hearing-impaired students. These students went on to work in communities and universities, and several of her students were instrumental in the development of a graduate school of social work at Gallaudet University. Gallaudet established a scholarship fund in Arlene’s honor, and Arlene was very pleased that her work would continue through this scholarship. Arlene married Patrick Gavin in 1955. During their 44-year marriage, Arlene and Pat spent much of their time sailing their Cal 36, Cherrybomb, on the Chesapeake Bay with their family and friends. After retirement, they spent winters sailing in the Bahamas and the Florida Keys. Later, they enjoyed traveling to the Southwest and Florida in their RV. Arlene was an avid golfer, bridge player, and reader. She served on the board of the League of Women Voters and was active in the Panhellenic Club. Arlene touched many lives with her love, and she will be remembered as a mentor, advisor, confidante, and advocate by those who knew her. Arlene was preceded in death by her husband, Pat, and her sister, Marie. She is survived by her two daughters, Kathy Poerstel and Chris Shea, her stepdaughter, Patty Glasgow, and their spouses. In addition, Arlene is survived by her eight grandchildren and two great-grandchildren. A celebration of Arlene’s life will be held at a future date when we can gather safely. In lieu of flowers, donations to the scholarship that Arlene helped set up at Gallaudet University can be made at https://gallaudet.edu/ode/gavmos

Arlene Gavin of Annapolis died peacefully in her home on November 22, 2020, surrounded by her family. Arlene was just two months short of her hundredth birthday. Arlene was born on February 2, 1921, in Akron, Ohio. She earned her bachelor&#8217;s... View Obituary & Service Information

The family of Arlene Gavin created this Life Tributes page to make it easy to share your memories.

Arlene Gavin of Annapolis died peacefully in her home on November...

Send flowers to the Gavin family.