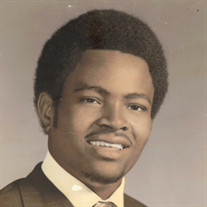 Allen Levi Snowden, Sr., age 70, was born on September 24, 1950, in Annapolis, Maryland to the late Ora and William Snowden, Sr. He departed his earthly home on February 5, 2021 and entered into eternal rest. “Big Al” or “Hip City,” as he was fondly called, received his education in the Anne Arundel County Public Schools and graduated from Annapolis Senior High School. Early in life, he owned the Hip City Pool Hall located in the Eastport community of Annapolis. He was also the owner of Blue Diamond Cab Company. Before enduring a back injury, Al’s last employment was as a truck driver for Baltimore City. Al was united in holy matrimony to Esther Jones-Snowden. They were married 31 years; however, they enjoyed 48 years together. Al always made sure he was known when he walked into ANY room, by one of his “sharp outfits,” to his “Stacy Adams shoes,” or with his hair “fried, dyed, and laid to the side.” Every time you saw Big Al, he was sure to bust a rhyme for you or say something slick such as “Ain’t nothing shaking but the bacon” or “Just the same old gravy just warmed over.” Al loved spending time with his grandchildren, especially when he took them to the grocery store and allowed them to control the wheelchair cart. He was an avid lottery player. He enjoyed watching Westerns and maintaining his garden. He always shared the green peppers and pears that he and his granddaughters planted. He was a loving father of four children, and a doting grandfather of nine grandchildren, and five great-grandchildren. Even though he may not have been in their presence on a daily basis, you best believe that he loved each and every one of them. They would tease him because he had two granddaughters named Breonna. Al loved to cook and every morning he would call Keonna and have her stop by, before going to work, to partake in his famous fried potatoes, bacon, and cornbread for breakfast. In addition to his parents, Ora and William Snowden, he was also preceded in death by two sisters, Alverta Coleman Barnes and Teresa Hamilton. Al leaves many fond memories to be cherished by his loving wife, Esther Snowden; four children, Angel Snowden-Watkins, Allen Snowden, Jr. (Tracy), Keonna Snowden (Bradley), and Kenya Snowden (Keith); nine grandchildren, Monyee Snowden, Daishaun Snowden, Allen Snowden, III, Breona Snowden, Jasmine Snowden, Bre’Onna Neal, Madison Neal, Khai Gross, and Treasure Coates; five great-grandchildren; four sisters, Helen Blake, Ora Collins, Henrietta Williams, and Carolyn Keene; two brothers, William “Junior” Snowden, Jr., and the Honorable Carl “Brother” Snowden; five aunts, Daisy Downs, Minnie Makell, Audrey Brown, Emma Makell, and Beverly Francis; one uncle, Louis Snowden; and a host of nieces, nephews, cousins, other relatives and friends.

Send flowers to the Snowden family.