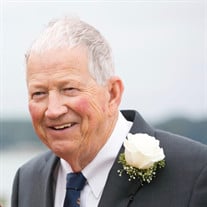 CTRC Allan James Suing, USN Ret, 82, of Sherwood Forest MD died on Friday, January 29, 2021 at home with his family after a years-long valiant battle with Parkinson's disease. He was born to Albert and Agnes Suing on the family farm in South Dakota. After high school he enlisted in the Navy and was selected to be in the US Nav Sec Grp where he spent his entire career. His tours included the Far East, Middle East, Africa, Europe and the United States. After retiring from the Navy, he earned his BS from the University of Maryland and his MA from Central Michigan University, then returned to the work he loved at the National Security Agency. Allan met his beloved Christy in late 1964, marrying in 1965. He loved finding antiques for their home, especially during the 3 years they spent in Cheltenham, England. He also loved fishing, spending time on the Chesapeake with his son Butch and friends, and observing the resident ospreys and boating activity in front of his home on the Severn River. Many days you could find him in the yard tending to the garden or tinkering in the basement building something for the house. He was an avid MD Terps fan, and, most importantly, cherished spending time with his children, grandchildren, and great-grandchildren. Allan is survived by his wife Christy of Sherwood Forest, his son Allan Jr. (Butch) also of Sherwood Forest and wife Jill of Edgewater MD, his daughter Karen Suing Kelley and husband Gregory Kelley of Edwards, CO; grandchildren Larson of Severn MD, Merrily and Jack of Edgewater MD; great-grandchildren Leo and Ainsley of Severn MD. He is also survived by three brothers and wives: Jerald and Phyllis of Sioux Falls SD, Duwayne and Jean of Beloit WI, and Dwight and Julie of Sioux City IA, as well as many nieces and nephews. Memorial contributions may be made to Hospice of the Chesapeake, 90 Ritchie Hwy, Pasadena MD 21122. A family service will be held at Baldwin Memorial United Methodist Church with placement of his ashes immediately following at the nearby Crownsville Veterans Cemetery. The service will be livestreamed on Monday, February 8, 2021 at 1:30 PM. To view the stream, visit Allan’s Tribute Page on www.LastingTributesFuneralCare.com. Obituary Photo by: Wendy Hickok

CTRC Allan James Suing, USN Ret, 82, of Sherwood Forest MD died on Friday, January 29, 2021 at home with his family after a years-long valiant battle with Parkinson's disease. He was born to Albert and Agnes Suing on the family farm in South... View Obituary & Service Information

The family of Allan James Suing created this Life Tributes page to make it easy to share your memories.

Send flowers to the Suing family.