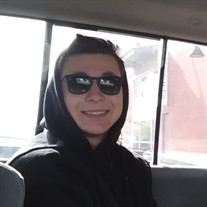 Alexander Michael Stevens, was Born on July 18, 1999 to Anthony Michael Stevens and Kelly Lynn Stevens (Rork). He was the Blessing of God in their union and the second son born to the newly young, hopeful and engaging couple. Alex, Just born... View Obituary & Service Information

The family of Alexander Michael Stevens created this Life Tributes page to make it easy to share your memories.

Send flowers to the Stevens family.