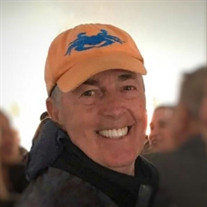 In lieu of flowers, donations may be made to the Alan Pastrana Memorial Athletic Fund by visiting: https://osp.osmsinc.com/AnneArundel/BVModules/ProductTemplates/Bvc2013/Product.aspx?productid=A4013-VAR21, Annapolis High School, 2700 Riva Road, Annapolis MD 21401 Alan Pastrana passed away on April 8 at Anne Arundel Medical Center after a brief illness. He was born in Annapolis, Maryland, the second of nine children, to the late Charles and Ruth Pastrana. Alan attended Annapolis High School and excelled at football, wrestling, and lacrosse. His leadership skills were recognized early as he captained all three of his high school teams. A most cherished memory for him was being part of the undefeated 1962 Annapolis High School football team. After graduating from high school in 1963 he attended Severn School for a prep year where he could again be found on the gridiron throwing touchdowns. In 1964, he received a football scholarship to the University of Maryland, College Park. In 1966, he ranked third in offense in the ACC throwing for 1499 yards and completing 17 touchdown passes. Alan held the passing record at Maryland for 16 years until it was broken by Boomer Esiason in 1982. Upon graduating from Maryland, Alan was drafted by Lou Saban and the Denver Broncos. After two years in the NFL, he accepted a job at Anne Arundel Community College where he taught Health and Physical Fitness and coached football and lacrosse. He received his Master’s Degree from George Washington University. Alan was more than an outstanding athlete. He was an extraordinary teacher and coach, reaching out to youngsters throughout the Annapolis/Anne Arundel communities. One of his greatest pleasures was working with Dr. Robert Graw Jr. and Headfirst/Righttime as a community advisor to educate students, parents and trainers on concussion awareness and safety on the field. As an elite athlete, Alan accumulated many awards and honors but nothing meant as much to him as his family. He married his college sweetheart, Diane Laudenslager, also of Annapolis, and was a devoted family man. Even while coaching he always managed to find time to help out with the family waterproofing business during the summer. Alan will be remembered not only for his outstanding athleticism but his huge heart, unselfish work ethic, and above all his love of family. Alan and Diane have been married for 51 years. They have been blessed with two wonderful daughters; Shannon Pastrana Overend (Chris) and Lisa Pastrana Brabazon (John). Fortunately the two girls gave Alan five grandsons; Zack Christian, John Joseph (J.J.) , Luke Alan, Chase McKinney and Michael Cole (Mac) and, oh yes, one sweet girl named Claire Ruth. Alan was predeceased by his brother Richard (Gina), and is survived by sisters; Lyn Durland (Dan), Kate Howard (Damien), Dawn Powell (Dean) and brothers; Robert (Laura), Ron (Anita), Roger (Juli) and Russell (Paula). On Saturday, July 31st, at 10:00am, there will be a memorial event to celebrate his life at Saints Constantine and Helen Greek Orthodox Church at 2747 Riva Road in Annapolis, Maryland. Donations may be made to the Alan Pastrana Memorial Athletic Fund, Annapolis High School, 2700 Riva Road, Annapolis MD 21401 Or Donate directly to the link below. https://osp.osmsinc.com/AnneArundel/BVModules/ProductTemplates/Bvc2013/Product.aspx?productid=A4013-VAR21

The family of Alan Pastrana created this Life Tributes page to make it easy to share your memories.

In lieu of flowers, donations may be made to the Alan Pastrana...