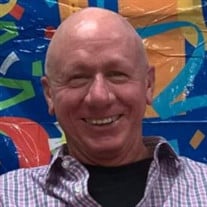 Alan Edward “AB” Bell passed away on May 22, 2022 at the age of 59, after a long and valiant struggle. Born in Glen Dale WV, he was the son of Wade and Janet Bell, both deceased. He is survived by his wife of 24 years, Roseanne, his brother Wade “Buddy” Bell, sisters Lee Ann and Leslie, nieces and nephews Jake, Alexis, Ian, Max and Bryce, and all the friends and family that stayed beside him physically and in love and spirit during his final journey. Alan loved being a West Virginia boy, living walking distance to school, hanging by the creek and in Glen Dale park, and growing up with the four Blazer kids and the four Ritz kids living right beside his family. He loved his town on the Ohio River, and was very proud of being on the wrestling team at John Marshall High School, where he graduated in 1980. For a few years he attended West Virginia University, ultimately earning his bachelors degree in Business from West Liberty. He left West Virginia with his friend Rusty Conner and moved to Virginia Beach, beginning a career in the concrete industry that took him to Richmond, Roanoke and ultimately to plant manager for a concrete plant in Jessup MD. In 1998, after his marriage, he became a forklift salesman, and his last and favorite job was as an agent for Lighthouse Insurance working side by side with golfing buddies Mike Thomas and Gary Heldt. In 1994, he met his future wife, Roseanne Quinn, when he spilled a beer on her in a bar and no one was surprised to hear this! He married her on April 18, 1998 in Roseanne’s hometown on Maryland’s Eastern Shore, at a fabulous, fun weekend that is still reminisced about today. They settled together in Annapolis MD and created a wonderful life together filled with loved ones, good times, laughter, and endless memories. Alan was a man of passionate beliefs and interests. He loved golf, watching sports, particularly his Pittsburgh teams and the West Virginia Mountaineers, and politics. Many trips involved golfing at places around the world like Royal Dublin and Portmarnock in Ireland, Banff Springs and Whistler in Canada, Doral in Miami, the One and Only Pamilla in Cabo, and the Ocean Club in the Bahamas. He spent most weekends at the Crofton Country Club, where he and Roseanne played golf and made many friends, and he was surrounded by a large group of buddies who were like brothers to him. His life in Annapolis was spent enjoying wonderful dinners and watching sports with his many friends. He will be remembered for his sense of humor, generous, fun loving heart, and endless analysis of the golf swing. Those who love him are sure he is up in heaven now, working on a new swing thought and cheering on his teams. In lieu of a memorial service, Alan wanted three parties, so his “Farewell Tour” events will be held in Annapolis, the Crofton Country Club and a final one in his hometown of Glen Dale, WV. These will happen in August/Sept as Alan would have been 60 on August 29. The dates will be shared when details are available. If you are so inclined to donate, Alan’s main charity was the Tunnel to Towers Foundation, the second one is St. Jude’s Children’s Hospital. He always said it was a shame to see the children on his hospital stays, as they might not get to have the wonderful life he already had had. *Take me home, country roads…to the place I belong*

The family of Alan Bell created this Life Tributes page to make it easy to share your memories.

Send flowers to the Bell family.