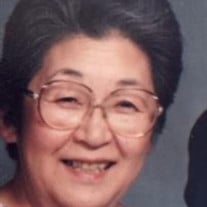 Aiko (Alice) Ogata Iseri, of Odenton, Maryland, passed away peacefully on Tuesday, April 14 at the age of 99. Alice's father, Torazo (Frank) Ogata, immigrated from Japan to the U.S. in 1915, prior to the Immigration Act of 1924 which Congress enacted to reduce the number of immigrants from Japan and other countries. Most of the Japanese settled along the Pacific, throughout Southern and Northern California as well as Oregon and Washington. Frank came to America as part of the Issei generation, or first generation of immigrants. He met and married Mie Sakaguchi when she was just 16, in what is now Santa Clara, California. They had eight daughters, of whom Alice was the second eldest. Alice was born February 24, 1921, in San Jose, California, about 3 miles west of Santa Clara. She met Dick during World War II while imprisoned in the Amache internment camp in southeast Colorado. After the war ended, the two of them went to Michigan to start new lives. Eventually they moved back to California and settled in San Jose where they built their home and remained for sixty years. Alice worked in various secretarial jobs in her early years, but later settled into being a homemaker and mother. In her much later years, she went back to work at Macy's where she spent thirteen years and enjoyed staying active. She was a talented homemaker and seamstress, and a devoted wife and mother. When Dick retired, she had the opportunity to travel to different countries, take cruises and enjoy life. Mom was a Christian and kept God close in her heart. She lived a full life and will always be remembered for her kindness to others, her devotion to family and friends and her sweet and gentle nature. She is preceded in death by her sisters, Yuriko, Kiyoko, Mitsuko, Sumiko; her husband Richard Iseri; and nieces Stacy and Barbara. She is survived by her sisters Tomiko, Mae and Haru, daughter Marilyn White, son-in-law Tad White, sister-in-law Toshiko Iseri, niece Karen Iseri and grandchildren Brendan and Alison White. Final resting place will be Oak Hill Memorial Park in San Jose, CA, with a burial service at a later date.

Aiko (Alice) Ogata Iseri, of Odenton, Maryland, passed away peacefully on Tuesday, April 14 at the age of 99. Alice's father, Torazo (Frank) Ogata, immigrated from Japan to the U.S. in 1915, prior to the Immigration Act of 1924 which Congress... View Obituary & Service Information

The family of Aiko "Alice" Ogata Iseri created this Life Tributes page to make it easy to share your memories.

Send flowers to the Iseri family.