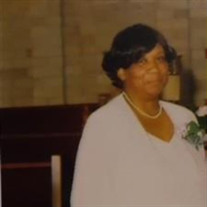 Agnes Edna Jones Murray was born on February 10, 1947 in Annapolis, Maryland to the late Edgar K. and Mary J. Brown Jones. Affectionately, known as Edna, she graduated from Wiley H. Bates High School in 1965 where she was a debutante. Agnes... View Obituary & Service Information

The family of Agnes Edna Murray created this Life Tributes page to make it easy to share your memories.

Send flowers to the Murray family.